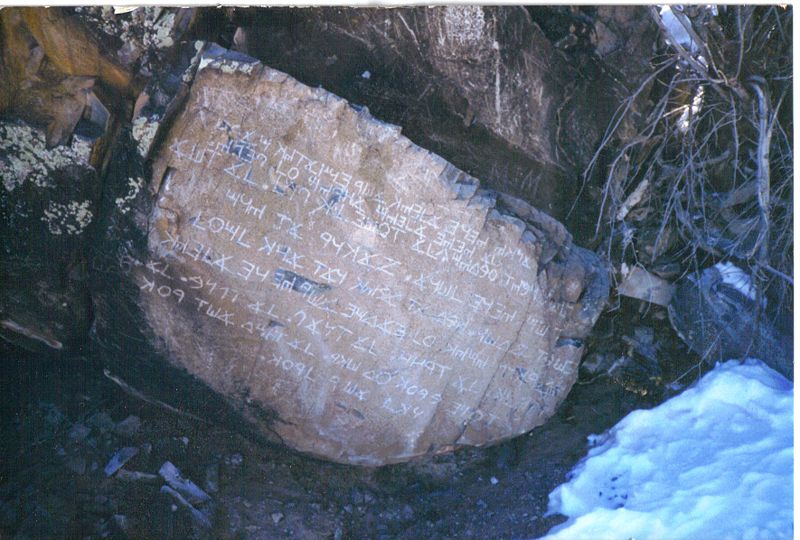 Israelites from the time of Solomon were wandering about America 2500 years before Columbus discovered it for himself.  This is found in the Scriptures where King Solomon sent out his ships around the world for 3 years at a time.

21 All King Solomon’s goblets were gold, and all the household articles in the Palace of the Forest of Lebanon were pure gold. Nothing was made of silver, because silver was considered of little value in Solomon’s days. 22 The king had a fleet of trading ships at sea along with the ships of Hiram. Once every three years it returned, carrying gold, silver and ivory, and apes and baboons.

The stone inscription is carved in ancient Paleo-Hebrew letters. These are almost identical in shape and font-style with Phoenician characters. Each line in the message is to be read from right to left. In the Hebrew written language there are no vowels. It only uses consonants.

Each statement is separated from the next one by a dot sign. This separation style is not uncommon for old Hebrew or Phoenician inscriptions. E.g. the Middle Eastern Moabite Stone (9th century B.C.E.) follows a similar pattern using dot separators between words.

The Los Lunas inscription starts with the top line, continues on the 3rd line, goes back into the 2nd line (that one was inserted later, hence the smaller line spacing), it then goes on with the left half of the 3rd line and continues all the way down to the last line.

A detailed interlinear translation, which has been compiled from a careful drawing of the Los Lunas inscription, and can be studied below:

Here is a modern-day English translation of the Los Lunas Decalogue:

“The Los Lunas Decalogue Stone is a large boulder on the side of Hidden Mountain, near Los Lunas, New Mexico, about 35 miles south of Albuquerque, that bears a very regular inscription carved into a flat panel.  The stone is also known as the Los Lunas Mystery Stone or Commandment Rock. The inscription is interpreted to be an abridged version of the Decalogue or Ten Commandments in a form of Paleo-Hebrew.  A letter group resembling the tetragrammaton YHWH, or “Yahweh,” makes three appearances. The stone is controversial in that some claim the inscription is Pre-Columbian, and therefore proof of early Semitic contact with the Americas.

The first recorded mention of the stone is in 1933, when the late professor Frank Hibben (1910-2002), an archaeologist from the University of New Mexico, saw it.  According to a 1996 interview, Hibben was “convinced the inscription is ancient and thus authentic. He report[ed] that he first saw the text in 1933. At the time it was covered with lichen and patination and was hardly visible. He was taken to the site by a guide who had seen it as a boy, back in the 1880s.”