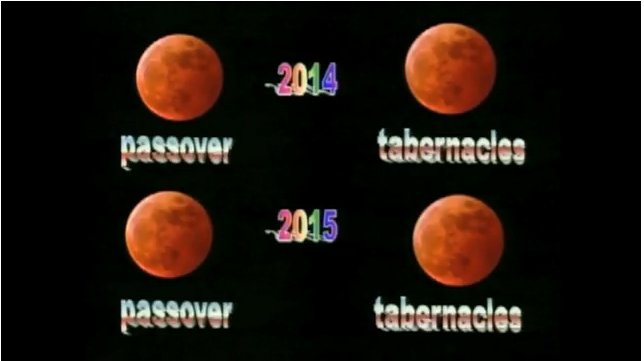 When four consecutive lunar eclipses are all total eclipses, the group is known as a tetrad.

Three of these occurrences were connected to:

1492 -the Spanish Inquisition & the discovery of the New World

1948 -Israel’s War of Independence & the statehood for Israel

1967 -the Six-Day War & Israel’s gaining the West Bank, the Gaza Strip, the Sinai Peninsula, East Jerusalem, and the Golan Heights

Three sets of blood-red moons that corresponded to significant events:

We don’t have any historical connections for these years at this time, but we do know of significant Jewish persecution during the eighth and ninth centuries.

In all eight examples, the eclipses have fallen or will fall on the first day of Passover and Sukkot.

The Lunar eclipses break down as follows:

The real shocker is that this phenomenon is extremely rare, for this pattern of eclipses to fall on both Passover and Sukkot in two years in a row, and for a solar eclipse to occur on important Holy Days in the same year (2015).

This intriguing, incredible discovery comes from Mark Biltz, pastor of El Shaddai Ministries, in Bonner Lake, Washington.  Biltz was intrigued with the statement in the Scriptures that connect the second coming of the Messiah with “signs in the heavens,” particularly the signs that “the sun will be turned into darkness and the moon into blood” before the return of the Messiah.  He went on the internet, to the U.S. Government NASA website to see if there were any significant eclipses of the sun and moon during the next few years. To his surprise, he discovered four lunar eclipses in the year 2014/2015, and was intrigued by the fact that they occurred on Jewish annual Holy Days!

Writing about the amazing discovery in the May 2008 issue of Prophecy in the News, J. R. Church declares, “This is most unusual. It is a rare occurrence for four lunar cycles on successive Passover and the Feast of Tabernacles (Sukkot) observances. It will not happen again for hundreds of years.”

Says J. R. Church, in a letter accompanying the magazine issue, “Four lunar eclipses occurring on the Feast of Tabernacles and Passover in two successive years are phenomenal. But add to them two solar eclipses on the two days that open the Jewish year – Adar 29/Nisan1, just two weeks before Passover, and Tishri 1 (Rosh Hashannah) – is uncanny. On each of these six Jewish Holy Days, the sun will be darkened and the moon will not give her light. Will this happen again in the 21st century? No. Did it happen in the 20th century? Yes, in 1949/1950, the year following Israel’s statehood, and 1967/1968, the year Jerusalem was liberated in the Six-Day War! Before that, you have to go back to 1493 for four successive lunar eclipses on Passover and the Feast of Tabernacles” (May 2008 letter).

In summary, it seems that each time there is to be blood-red moons on the first day of Passover and the first day of Sukkot on back-to-back years, then Israel or the Jews have to go through some kind of tribulation, be it persecution or war.  But the good news is that they seem to be victorious in the end and gain more land or territory as a result.

So, if the historical pattern holds true for 2014-2015, then we can expect some kind of war for Israel and the Jews between 2013-2015, but they will be victorious in the end and gain more territory or land as a result.