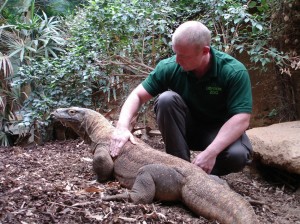 The word dinosaur was invented in 1841 and simply means terrible lizard.  Before that time, these creatures were known as dragons.  The average dinosaur was about the size of a sheep.  Some of them were the size of chickens.  Some of them got to be gigantic.  These creatures are just different kinds of reptiles.  Reptiles never stop growing for the entirety of their life.  The older they get, the bigger they get.  The largest dinosaur is only the size of a basketball at birth.  Noah took young vibrant reptiles on the ark and not the senior citizens.

People before the flood lived to be an average of about 900 years old.  The reptiles also enjoyed longer lives as well, so were able to grow to be enormous.  In fact, the oldest living animals today are reptiles.  Some turtles live to be 200 today which is about twice that of a man.  At this rate the same turtle could have lived to be 1656 years until the flood destroyed them.  They would have been about 40 feet in diameter. There have been 100′s of dinosaur fossils discovered and each one is given a distinct name as if it were an entirely different kind of dinosaur.  If one studies all the different dinosaur fossils discovered, then he will find that there are only about 50 different kinds of dinosaurs, so only about 100 dinosaurs were taken aboard the ark.  100 dinosaurs each about the size of a sheep would be no problem for Noah to care for.  Small young dinosaurs take up less room, eat less food, and would be better fit for both the journey and for having offspring after the flood.  Yahweh probably had all the animals go into hibernation during the year on the ark which would make things even easier. The majority of dinosaurs were destroyed during the flood especially the gigantic ones.  After the flood dinosaurs began to multiply again, but they no longer lived as long as before the flood.  The average life-span of people (and by extension reptiles) right after the flood was reduced by half from 900 to 450 years.  So dinosaurs living at this time would have grown to be only half the size of dinosaurs before the flood. About 100 years after the flood the lifespans were again reduced by half from 450 down to 225 years.  This was probably due to the ice age.  So again the dinosaurs would be even smaller to about 25% the size of the ones before the flood. As the dinosaurs multiplied upon the earth they slowly became a menace to the people and so dragon/dinosaur hunters such as Nimrod were necessary to keep the dragon/dinosaur populations down.  Hence, there are hundreds of dragon/dinosaur legends still extant until this day all around the world. Although the gigantic ones were wiped out at the flood there remained dinosaurs for thousands of years even in the 21st century there are a few still roaming the earth in some of the remotest parts of the earth.

A lot of the lizards and other reptiles that are found everywhere on the earth used to live 10 times longer than they do now and would have been 10 times larger as well. When the Americas were first being discovered by Europeans there were reports of pterosaurs, 100 foot anacondas, 50 foot alligators, and others.  Sea monsters were reported regularly up until the mid-1800′s with the invention of loud engines which give ample warning for any such creatures to swim away before being spotted.  A plesiosaur was caught by Japanese fishermen in the 1970′s off the coast of New Zealand. The Ica and Nazca tribes of Ancient Peru lived side by side with a half dozen different kinds of dinosaurs.  They recorded what they saw in very great detail on over 10,000 Ica stones, textiles, totems and Nazca lines in the desert.  Also, tribes in Mexico recorded the same kinds of dinosaurs living side by side with men on their own stone carvings.  Cave drawings around the world record dinsaurs with man.  The ancient Babylonians raised dinosaurs as pets and for entertainment.  The apocrypha records how the prophet Daniel killed one.  Marco polo spent many decades in China and Mongolia and recorded how the Chinese Emperor raised dinosaurs to pull his chariots.  There is overwhelming evidence of dinosaurs living with man all throughout history. Today, we still have great turtles that live to be 200 years old.  The Komodo dragons still live today, but only get to be 10 feet long which is only a small fraction of what they would have been before and right after the flood of Noah.  Giant snakes and lizards are still reported today in the Congo of Africa and in the Amazon of South America.  If one applies himself to diligent study, then one will find ample evidence of dinosaurs before the flood, after the flood, and still a small remnant even today.

The Scriptures record that sea dinosaurs and flying dinosaurs were created on day 5.  All the land dinosaurs were made on day 6.  Noah took two of each kind of dinosaur on the ark for preservation.  After the flood, Job recorded the two largest kinds of dinosaurs called behemoth and leviathan.  Behemoth was of the sauropod kind of dinosaur which were the largest of land animals ever created.  Leviathan was some kind of aquatic dinosaur.  Many sea captains and Vikings reported these sea monsters over the past few centuries.  There are many books, videos, and websites on this subject to further your study.

May Yahweh bless you in your understanding.