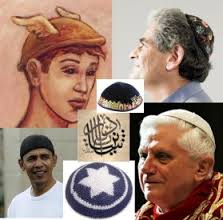 It is true that the Greeks wore the skullcap long before the Jews. It is also true that the Greeks forced the Jews to wear the skullcap as recorded in 2 Maccabees 4:12. The Greek skullcap was called a pilo or pileus which means felt. The Romans also adopted this Greek custom of wearing the skullcap and called theirs a pilleus or pilleum. The whole point of 2 Samuel 15:30, 2 Samuel 19:4, and Esther 6:12 is that in the Old Testament a covering was used during a time of mourning and not “in submission to G-d.”

Also, according to the Old Testament, the covering of the head is a sign of shame, not “submission to G-d.”  Jeremiah 14:3 And their nobles have sent their little ones to the waters: they came to the pits, and found no water; they returned with their vessels empty; they were ashamed and confounded, and covered their heads. 4 Because the ground is chapt, for there was no rain in the earth, the plowmen were ashamed, they covered their heads.

The Torah instructs us that only the sons of Aaron are to wear any type of head covering and only for temple service. Exodus 28:40 And for Aaron’s sons thou shalt make coats, and thou shalt make for them girdles, and bonnets shalt thou make for them, for glory and for beauty. Exodus 29:9 And thou shalt gird them with girdles, Aaron and his sons, and put the bonnets on them: and the priest’s office shall be theirs for a perpetual statute: and thou shalt consecrate Aaron and his sons. Leviticus 8:13 And Moses brought Aaron’s sons, and put coats upon them, and girded them with girdles, and put bonnets upon them; as the Lord commanded Moses. Leviticus 6:11 And he shall put off his garments, and put on other garments, and carry forth the ashes without the camp unto a clean place. Leviticus 16:23 And Aaron shall come into the tabernacle of the congregation, and shall put off the linen garments, which he put on when he went into the holy place, and shall leave them there.

Here is what the Jewish authorities say about the Kippah:

Rabbi David Frankel, Rabbi David Golinkin, Rabbi David Lazar, Rabbi Simchah Roth, Rabbi Yisrael Warman, & Rabbi Michael Graetz answered this question: Question: Are men obligated to wear a kippah all the time or only while praying? Responsum: “There is no Talmudic basis for forbidding a man to walk around bareheaded. In the period of the Mishnah and the Talmud, wearing a head covering was only a custom of piety observed by some of the SAGES IN BABYLON, particularly after marriage. After the Talmudic period, authorities differed greatly in their decisions about wearing a head covering and were influenced by the customs of their country and by the conditions of their time. In our day, wearing a kippah is primarily a symbol of Jewish identity. As such, it is undoubtedly good and advisable for a man or a boy to wear a kippah even when he is not praying. On the other hand, it is clear that whoever does not adopt this custom does not commit any transgression.There is also no Talmudic requirement for men to cover their heads when praying or reciting God’s name. The obligation to cover the head during prayer BEGAN IN BABYLON in the Geonic period and was restricted to the leader in prayer, to the reader of the Torah and to the Cohanim blessing the community. It seems that this custom was PARTICULAR TO BABYLON, while in Israel men were still praying bareheaded.”

Also, Ariela Pelaia is a professional Jewish Educator with masters degrees in Jewish Studies and Jewish Education. Ariela has bachelors degrees in Psychology and Religion from Wellesley College, a master’s degree in Jewish Studies from Columbia University and a master’s degree in Jewish Education from the Jewish Theological Seminary of America. Here is what this Jewish scholar says about the kippah: “Ultimately the decision about whether or not to wear a kippah comes down to personal choice and the customs of the community an individual belongs to. Religiously speaking, wearing kippot is not obligatory and there are many Jewish men who do not wear them at all. Wearing a kippah is not a religious commandment. Rather it is a Jewish custom that over time has come to be associated with Jewish identity and showing respect for God. In Orthodox and Conservative circles covering one’s head is seen as a sign of yirat Shamayim, which means “reverence for God” in Hebrew. This concept comes from the Talmud, where wearing a head covering is associated with showing respect for God and for men of higher social status. Some scholars also cite the Middle Age custom of covering one’s head in the presence of royalty. Since God is the “King of Kings” it made sense to also cover one’s head during prayer or religious services, when one hopes to approach the Divine through worship.”

Further, The Second Jewish Book of Why, by Rabbi Alfred J. Kolatch informs us, “There are no regulations in the Bible that require men keep their heads covered. The Bible does not even require headcoverings for men entering the sanctuary or participating in a religious rite or service. Only Priests were required to wear headgear (Exodus 28:4), and this when officiating at the Temple altar or when performing other priestly functions” (p.49). “In Palestine, a person in mourning generally followed the ancient custom of covering the head, but the Talmud indicates that those who came to comfort him and to recite prayers before him did not cover their heads. The minor Talmudic tractate Seforim, which was composed in Palestine, clearly states that a man with uncovered head may serve as the Torah Reader and may lead the congregation in reciting the Shema, something not permitted in BABYLONIAN synagogues” (p.49-50). “It is clear that according to Jewish law that there is no compelling reason for Jews to wear a headcovering. Nonetheless, for the reasons indicated above the BABYLONIAN CUSTOM of keeping one’s head covered not only during prayer but at all times became accepted by all traditional Jews” (page 51).