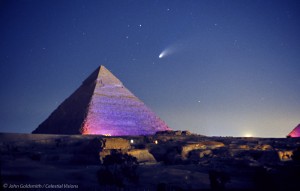 Hevelius wrote : “In the year of the world 2453 (1495 B.C.), according to certain authorities, a comet was seen in Syria, Babylonia, India, in the sign Jo, in the form of a disc, at the very time when the Israelites were on their march from Egypt to the Promised Land. So Rockenback. The Exodus of the Israelites is placed by Calvisius in the year of the world 2453, or 1495 B.C.”

Rockenbach’s “De cometis tractatus novus methodicus” He wrote his book using old sources which he did not name: “ex probatissimis & antiquissimis veterum scriptoribus” (from the most trustworthy and the most ancient of the early writers). “In the year of the world two thousand four hundred and fifty-three – as many trustworthy authors, on the basis of many conjectures, have determined – a comet appeared which Pliny also mentioned in his second book. It was fiery, of irregular circular form, with a wrapped head; it was in the shape of a globe and was of terrible aspect. It is said that King Typhon ruled at that time in Egypt….Certain [authorities] assert that the comet was seen in Syria, Babylonia, India, in the sign of Capricorn, in the form of a disc, at the time when the children of Israel advanced from Egypt toward the Promised Land, led on their way by the pillar of cloud during the day and by the pillar of fire at night.”

In Pliny’s “Natural History,” the ninety-first section of the second book reads: “A terrible comet was seen by the people of Ethiopia and Egypt, to which Typhon, the king of that period, gave his name; it had a fiery appearance and was twisted like a coil, and it was very grim to behold: it was not really a star so much as what might be called a ball of fire.”

Comet Hale-Bopp passed through the constellations of Perseus, Taurus, and Orion.

The Talmud states that “if a comet would pass through the constellation of Orion the world would be destroyed.”

Hale–Bopp had its closest approach to Earth on March 22, 1997 or just before the fist day of Passover/ Unleavened Bread.

Perihelion or the time when Hale-Bopp was closest to the sun was on April 1, 1997 or just after the last day of Passover/ Unleavened Bread.

Something more to consider:

When asked by Art Bell on the Coast to Coast AM show what the return of Nibiru would bring, Sitchen stated that Nibiru had at “one time, brought about the deluge, the great flood, mentioned in the Bible,” and the return may be what the Bible calls “the day of the Lord” or “the second coming.” He stated that the effect on the Earth would depend on where the Earth is positioned during the passage. Sitchen declined to state when he felt the 12th Planet would return, stating “I an not a prophet.” Sitchin stressed that he called himself a “reporter,” as someone who can read ancient Sumerian texts.

Sitchen called Hale-Bopp an “enigma” because it is too bright for being so far out, and referred to Hale- Bopp as a “so-called” comet. Sitchen reported that many people had called him, asking if Hale-Bopp was the return of Nibiru, because:

Hale-Bopp is on a retrograde (clockwise) orbit, as is the 12th Planet and half the comets visiting the Solar System.

Hale-Bopp is in the constellation of Sagittarius, which was mentioned briefly (see below) in one of Sitchin’s book, Genesis Revisited, as a possible sighting place for the 12th Planet.

Sitchen stated that in his opinion, Hale-Bopp was “not Nibiru” but was rather a “harbinger” of Nibiru.