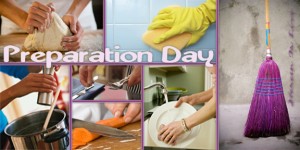 We find from the Scriptures that the Preparation Day is always the 6th day of the week.  It was set aside by Yahweh for his people to prepare for the weekly Sabbath.

4Then said Yahweh unto Moses, Behold, I will rain bread from heaven for you; and the people shall go out and gather a certain rate every day, that I may prove them, whether they will walk in my law, or no.

5And it shall come to pass, that on the sixth day they shall prepare that which they bring in; and it shall be twice as much as they gather daily.

Mark 15:42
And now when the even was come, because it was the preparation, that is, the day before the sabbath,

Luke 23:54
And that day was the preparation, and the sabbath drew on.

Josephus confirms that the Preparation Day was the 6th day of the week before the weekly Sabbath.

Josephus wrote the Jews were “not obliged to go before any judge on the Sabbath-day, nor on the day of the preparation to it, after the ninth hour (3:00 PM).” (Ant. XVI 6:2)

Jos. Ant. 16:6:2. “Caesar Augustus, high priest and tribune of the people, ordains thus: Since the nation of the Jews hath been found grateful to the Roman people, not only at this time, but in time past also, and chiefly Hyrcanus the high priest, under my father (7) Caesar the emperor, it seemed good to me and my counselors, according to the sentence and oath of the people of Rome, that the Jews have liberty to make use of their own customs, according to the law of their forefathers, as they made use of them under Hyrcanus the high priest of the Almighty God; and that their sacred money be not touched, but be sent to Jerusalem, and that it be committed to the care of the receivers at Jerusalem; and that they be not obliged to go before any judge on the sabbath day, nor on the day of the preparation to it, after the ninth hour.

Paraskeue is the Greek word for Preparation.  Paraskeue was the Greek equivalent of the Aramaic of “arubta-eve,” or Friday. The days of the week before the Sabbath in Aramaic were First, Second, Third, Fourth, Fifth and Arubta; there was no “Sixth” day. Therefore, Arubta, and by inference paraskeue, must refer only to Friday!

Hellenistic Jews used the term prosabbaton, or Sabbath-eve to designate Friday (Judith 8:6; 2 Macc. 8:26). Mark recorded, “it was the preparation day, that is, the day before the Sabbath,” (Mark 15:42) or paraskeue, the day of prosabbaton. Therefore, paraskeue was technically Friday!

May Yahweh bless you in your understanding.